Christ Church, Valdosta, has provided developmentally and educationally appropriate preschool education to hundreds of children over the past six decades. This service has been performed by a series of gifted, dedicated professionals. A testament to their work is the fact that so many of those fortunate children have grown up to be not only leaders in our church but of our community as well. Here is the story of how Christ Church Kindergarten and Preschool developed, of how inspired parish leadership, supportive parish members, and loving teachers influenced young lives positively and ultimately the world we live in.

German educator Friedrich Fröbel opened the first kindergarten in 1837 in Blankenburg, Germany. The word ‘kinder’ means ‘children’ in German, and the word ‘garten’ means ‘garden’ in German. A kindergarten for German immigrants opened in Watertown, Wisconsin in 1856, and it was not long before the kindergarten movement spread through the American landscape. The first English language kindergarten began in 1860 in Boston, Massachusetts (A. S. Passe, Kindergarten in the Twenty-first Century, p. 42-43, St. Paul, MN: Redleaf Press).

The Diocese of Georgia identified Christ Church first as an unorganized mission, then an organized mission. Because its membership and local activity had grown so well, delegates at Diocesan Convention voted May 11, 1954 to admit Christ Church as a parish. This designation meant Christ Church could be self-supporting and could develop new outreach initiatives. Among the first actions taken, Bishop Middleton S. Barnwell assigned the Rev. Michael J. Kippenbrock (1903-1973), who was serving as vicar, to be the first rector (H. T. Malone, The Episcopal Church in Georgia 1733-1957, 1960). The members of Christ Church also realized that birth through age five are critical years in the development of a child, so they encouraged the vestry to support the establishment of a kindergarten program.

Christ Church Kindergarten
Kindergarten during the first half of the 20th century focused more on social development, but by the second half of the 20th century, greater academic preparation was included so that instruction would align kindergarten to primary grades. Particularly in the southeastern United States, private kindergartens were the norm, and access to kindergarten was afforded to those who had the financial means to pay tuition. Under the direction of Mrs. George W. Tayman, a weekday kindergarten began in September 1954. Mrs. Tayman, the former Mary Katrina Lane (Ashley) (1891-1974), was well-known in Valdosta, being a granddaughter of Valdosta pioneer Remer Young Lane (1826-1917) and former daughter-in-law of Valdosta pioneer and mayor Cornelius Raines Ashley (1858-1926). A few local churches such as First Methodist already operated a kindergarten, and there were several private kindergartens.

Former pupil, Marvin Dickey, recalled (summarized by the author):
It was quite a large class. There were students in the 4-5-6 age range. We were all in one room, which today is the front part of the Parish Hall. This was before the Parish Hall was extended. We always called her Mrs. Katrina. Mrs. Katrina’s assistant was Lucille Dawson. There was a brick wall separating the property line between the back of the church sanctuary and what is now the church office (103 East College). There was a playground right out back with a swing set and a metal seesaw. It was a half-day kindergarten where children were picked up at lunch.

Lucille Dawson Sineath recalled (summarized by the author):
My father, John “Jack” L. Dawson, was Sunday School superintendent which is most likely how my mother, Lucille Dawson, came to be an assistant teacher for Mrs. Tayman’s kindergarten. She worked there a few years. Katrina Tayman was a most interesting person in that if she thought it, she said it. There was a piano in the classroom, and Katrina played it every day. She could sit on the stool and play the piano while watching the children and encouraging them to sing out. They had a rhythm band where children played sticks, blocks, drums, triangles, and cymbals. Whenever Mrs. Tayman was in a group and the topic became low or depressing, she would say, “Well, let’s talk about Jesus!” 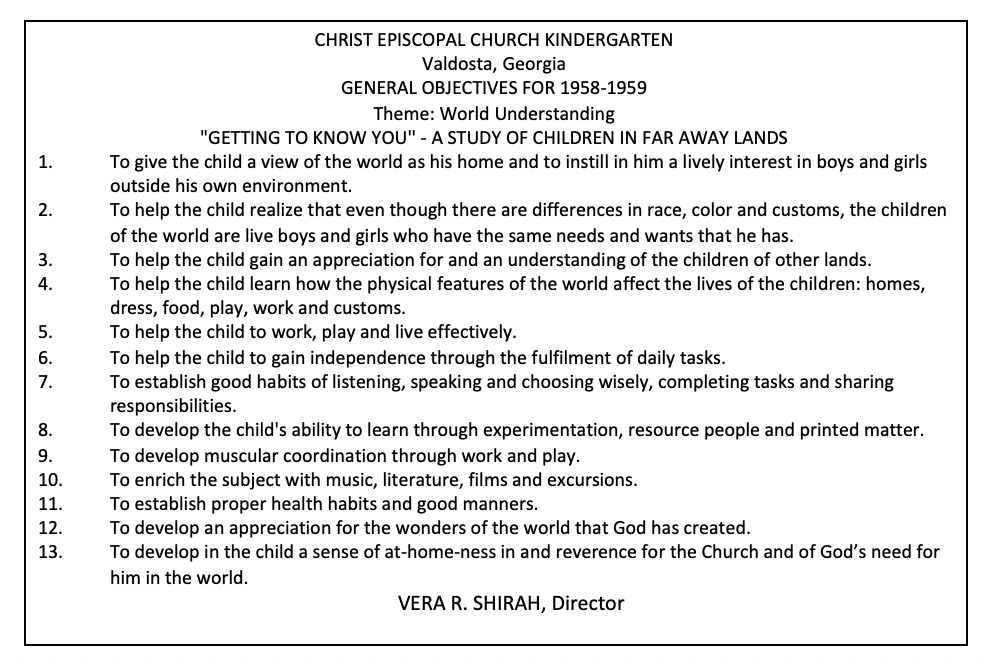 With growing church membership, the vestry purchased the adjacent property at 103 East College Street in December 1958. The building was renovated to house Sunday School for students at the kindergarten level and lower school grades, and in December 1960, named Stuart Hall (in honor of the Right Rev. Albert R. Stuart, Sixth Bishop of Georgia). This building (in 2021) houses the church offices and choir room.

Shirah was succeeded by Florence “Teeny” Elizabeth Roddey (1917-1967) (Mrs. David C. Jr.) and assisted by Ruth Ann Roddey (helper) and Mary Wolinski (pianist). Others assisting with the kindergarten were Mrs. Jamie Carroll (1914-2003) and Mrs. Oliver B. Jackson (1920-2007). In Spring 1965, 14 students enrolled in the kindergarten paying $15.00 per month (Vestry Minutes, February 1965). The Rector, Brevard S. Williams, “personally observed the Kindergarten [and] praised its operation” (Vestry Minutes, March 16, 1965). Some of the routine monthly expenses of the kindergarten included Mrs. Roddey’s salary, assistants’ salaries, Vallotton’s Dairy, maid service, cookies, and American Education Publications for weekly readers. Mrs. Roddey ceased working with the kindergarten at the end of the 1965 session, and the vestry noted that her “many high ideals and natural affections for the children had a strong influence on the building of their character…” (Letter from H. T. Amon, Jr. to Mrs. D. C. Roddey, Jr., June 30, 1965).

Joella J. Blackburn (1930-2007) taught ten years in the kindergarten beginning in 1965 when the classroom was in Stuart Hall which was sometimes referred to as the Kindergarten Building. Her son, Chip Blackburn, donated a collection of pictures from her time at the kindergarten to the Lowndes County Historical Society and Museum. With the Museum’s permission, several of these photographs are shared below. Ann Wood taught the 4-year old class while Blackburn taught the 5-year old class. 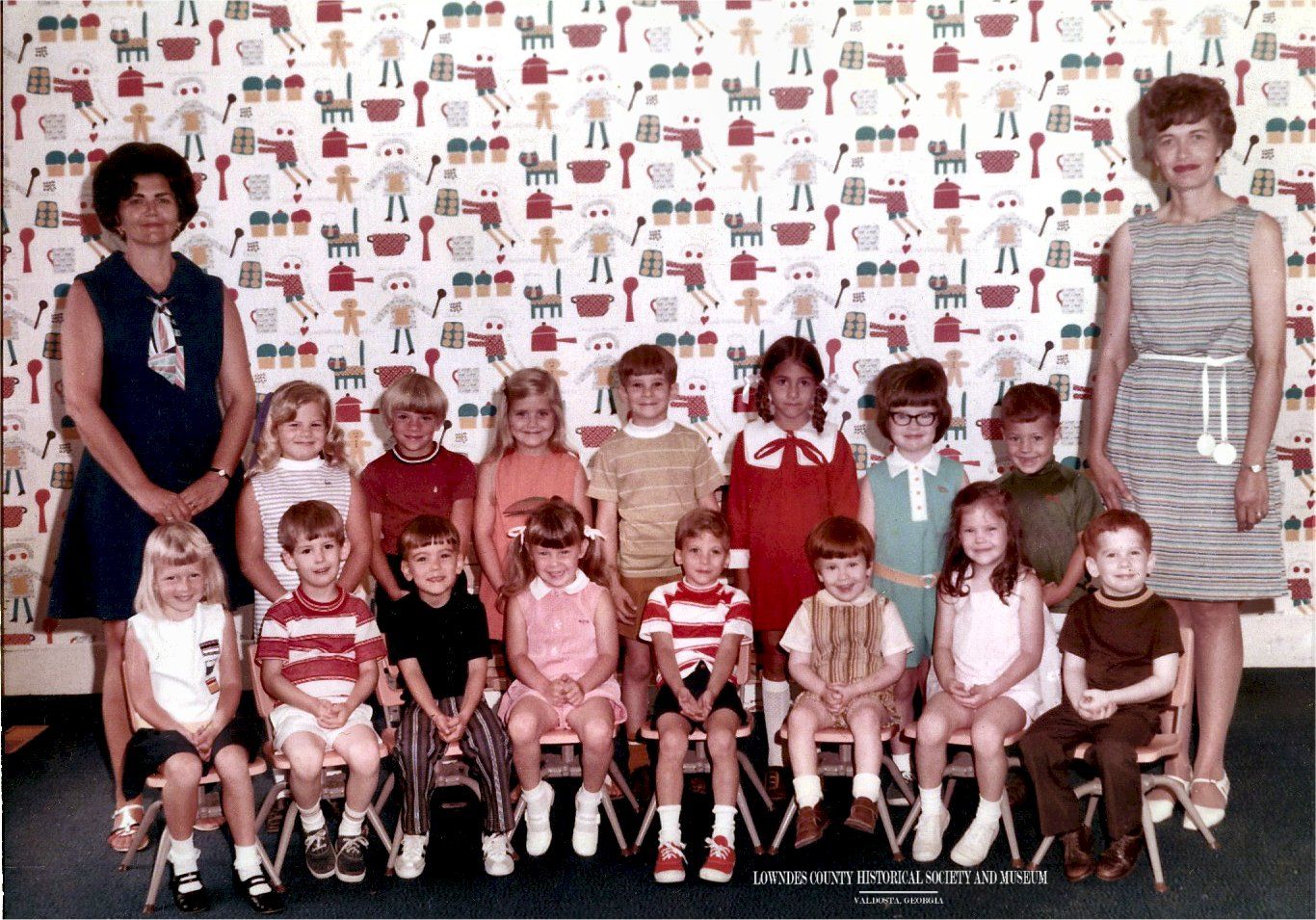 Former pupil, Andrea Stevens Summervill, recalled (summarized by the author):
I had Mrs. Wood when I was four years old and Mrs. Blackburn when I was five years old. I have several distinct memories from kindergarten at Christ Church. As a four year old, I was nervous about starting school for the first time. Mrs. Wood let me bring my ‘bop’ to school and stored it in the cabinet. As long as I knew it was there, I was fine. I adored Mrs. Blackburn. She saw me and understood me. I loved playing in the sandbox. I remember finding a boulder on the playground one day and took it home. It turned out to be a chunk of concrete. We occasionally would walk all the way down to Brookwood Park to play. Before we went to the park, we all had to use the bathroom. The boy’s bathroom stunk which reinforced our thinking that boys were gross. There was a four-year old classroom on one side and a five-year old classroom on one side and then we could come together in the middle room for circle time. Our snack was Kool-Aid and butter ring cookies. One time I had to go to time-out; I stood in the corner and watched the fish in the aquarium. When it was time to leave at lunchtime, my mother drove through the alley behind the kindergarten and stopped at the large lantana bush to pick me up.

Christ Church Preschool
The vestry had been working continuously to acquire additional property around the church by contacting neighbors (Vestry Minutes, January 17, 1972; July 17, 1972; September 18, 1972). In 1978, the vestry authorized an offer to purchase two adjacent properties to the south (1517 and 1519 N. Patterson St.) (Vestry Minutes, May 14, 1978). Negotiations continued for several months and in early 1979, the vestry authorized the Finance Committee to secure a loan up to $100,000 to finance the purchase (Vestry Minutes, February 26, 1979). These properties would later be named the Thomas Bray House and the Irene Miller House, and their acquisition would help to restart the Christ Church school. Some renovation occurred to both properties, and one was rented to Mrs. Probenda who operated a school. In early 1983, she notified Christ Church that her husband was being transferred, and the school would close at the end of the year (Vestry Minutes, February 21, 1983).

The Rev. Henry I. Louttit (1938-2020), Rector of Christ Church (1967-1994), desired to re-establish a preschool for 3 and 4 year olds. He envisioned the preschool as a form of mission outreach that would provide a rich learning experience for children in a happy, loving environment (and this purpose still guides the program today). A plan was presented to the vestry in 1983, noting that “such a school, employing two teachers, could be successfully operated and provide some income” (Vestry Minutes, February 21, 1983). A committee was immediately appointed to implement the program. Louttit also saw the practical side and knew that offering a preschool was not only a ministry for the church but could attract more families.

To prepare the building for opening, the vestry set out to remodel the Irene Miller House. By the end of summer 1983, “3 classrooms in Miller were now complete with new ceilings, carpet and wall paper, freshly painted trim” (Vestry Minutes, August 22, 1983). Christ Episcopal Preschool was re-established in 1983. The 4-year old preschool class opened with Marlin C. Ferrell as the instructor, and the 3-year old preschool class opened with Norma M. Tomberlin as the instructor.

The classes offered in 1983-84 proved successful. The tuition income that school year was $8,511 and $6,050 was spent on salaries, supplies, and utilities. The vestry approved remodeling the kitchen in the Miller House to accommodate a fourth classroom (Vestry Minutes, December 19, 1983). By 1985, the vestry authorized the Preschool Committee to raise tuition to $50 a month for the 1986-87 school year (Vestry Minutes, April 29, 1985). 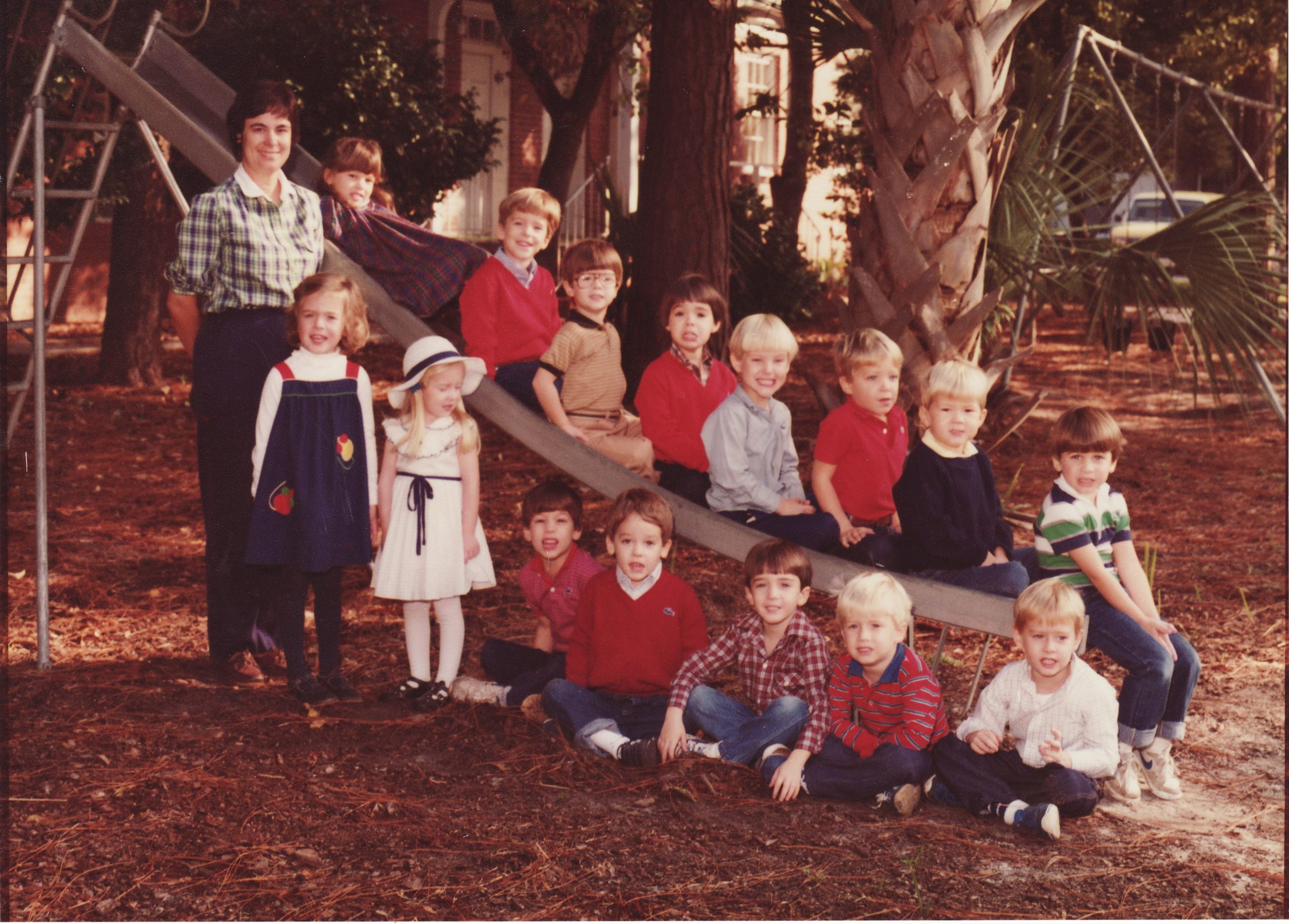 In 1959, Norma Lou Maxwell started school at Valdosta State College, moving here from Cairo. She lived in Ashley Hall, one of the residence halls for young ladies. Active during college, she was a member of the Sports Club, Kappa Delta Sorority, and Education Club, and secretary for the Student Government Association. She received the Marga and Mac Award for “Best All Round from the Senior Class.” She completed her Bachelor of Arts degree in English, with a minor in French, in 1963 and married Joseph A. Tomberlin (VSC Pinecone, 1960, 1961, 1962, 1963).

In 1977, she found her true passion: teaching preschool. She taught at Azalea City Baptist Church School (now Crossroads Baptist) from 1977 to 1983. She then transitioned to Christ Church Preschool. The preschool operated in the Irene Miller House for seven years before relocating to 109 East College Street in 1990 where it stayed for 22 years. While many of us have memories of Norma Tomberlin, a smile comes to my face when I recall seeing her lead a line of children on their morning walk, typically down the sidewalks around the church property. 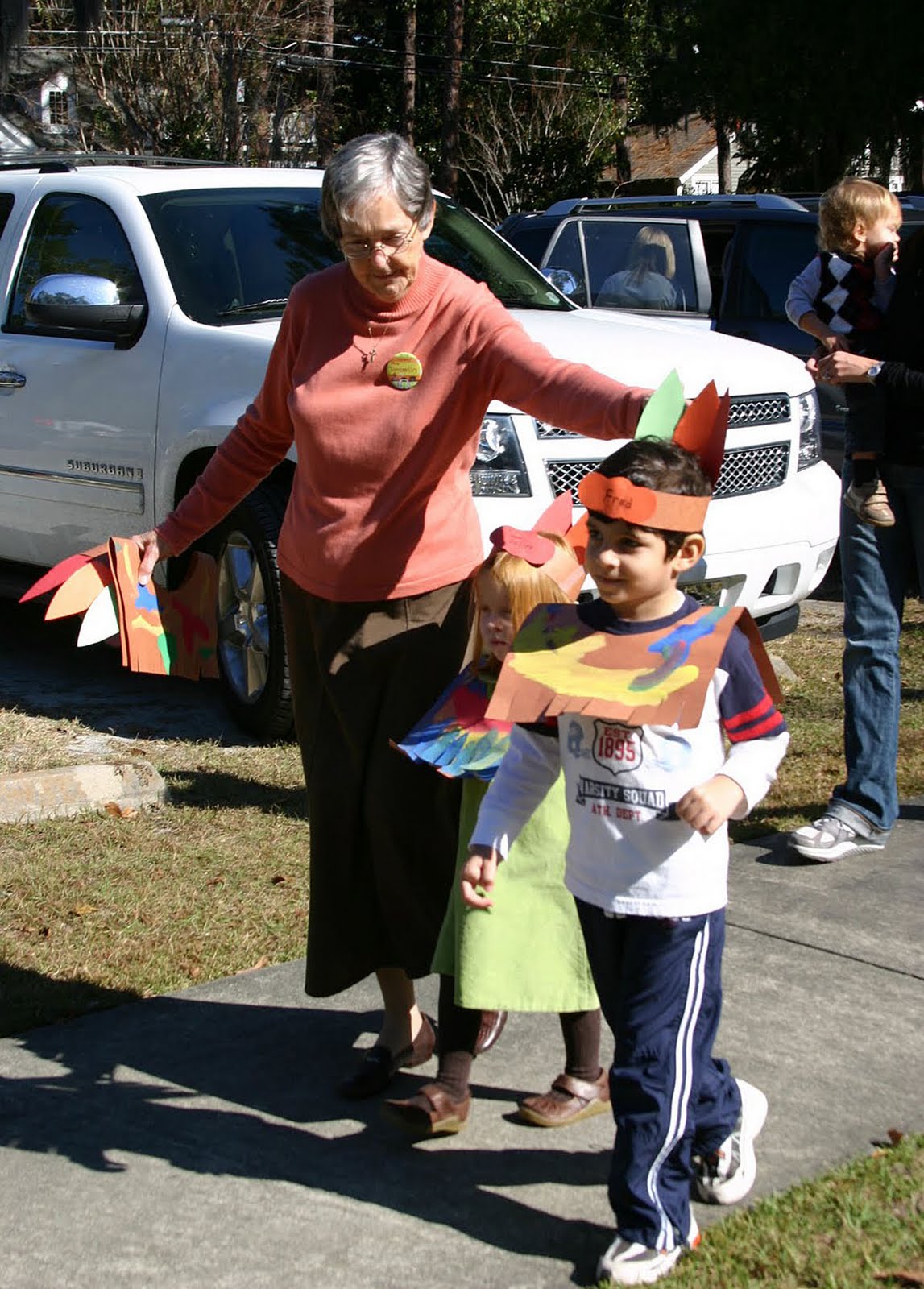 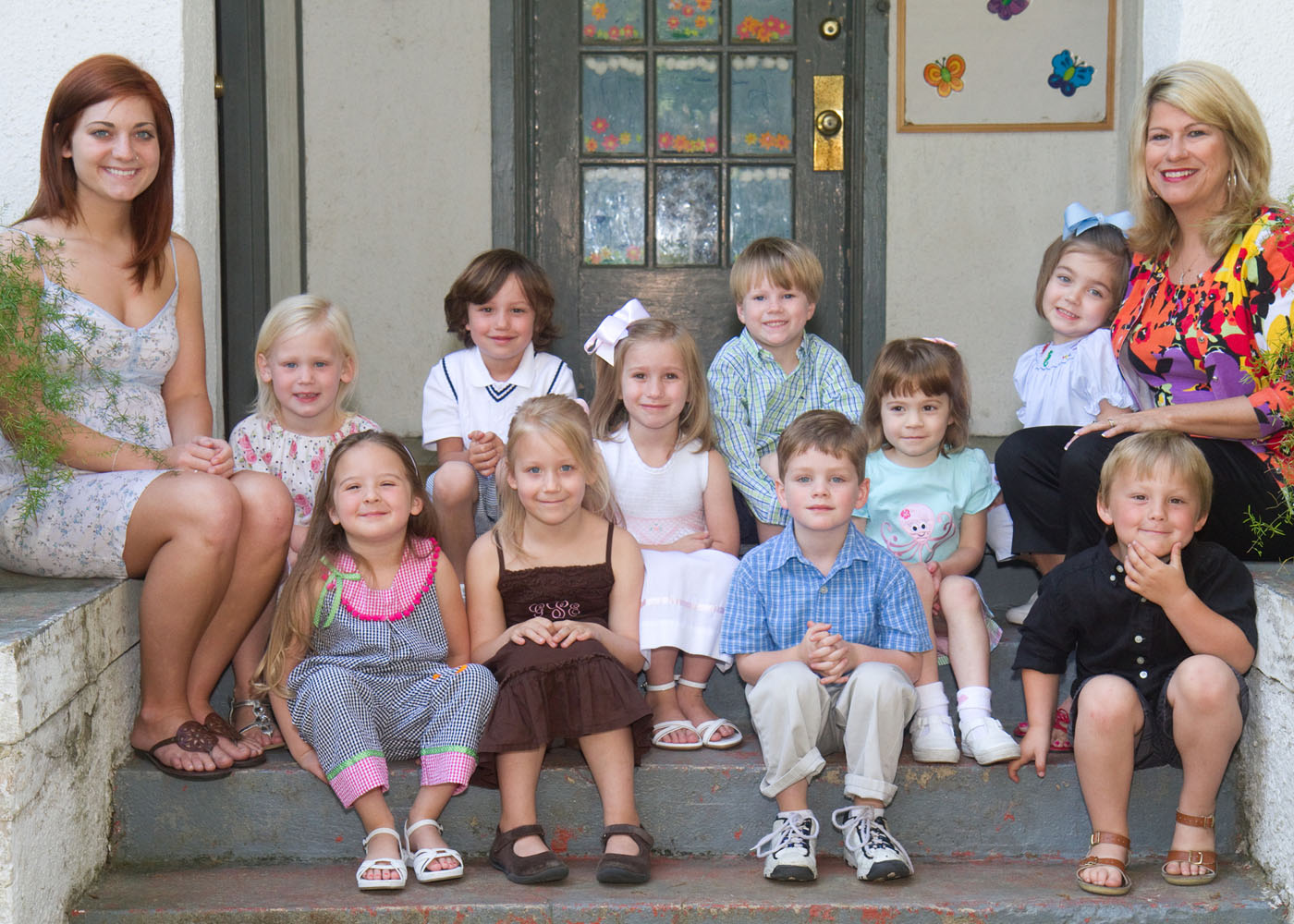 Elise Sandbach (far right) and assistant Patricia Greneker (far left) with their class on the steps of the Tomberlin House in 2010.

Elise Sandbach started teaching at Christ Episcopal Preschool in September 1992. Soon to complete her 29th year, she shared, “I have the best job in the world. I love the children. And I enjoy supporting parents. I have watched generations of kids grow up, and I am now teaching the children of children that I taught.” Remembering her friend and co-teacher, she continued, “Norma Tomberlin was the soul of the preschool. I think of her almost every day.”

The family of Christ Church, Valdosta, extends tremendous gratitude to our current and former preschool teachers and to all those who have supported and continue to support this wonderful program. This author can be seen as a bespectacled, four-year old in the 1983 photograph of Mrs. Ferrell’s class. I remember so clearly her gentle ways, and I hear to this day Mrs. Tomberlin’s joyous, morning greeting: “Bonjour!”

Sincere thanks to all who have contributed memories or photographs which have been indispensable in the creation of this article. I invite you to submit any kindergarten/preschool memories or article corrections here.

Enjoy some of our preschool picture albums from past years. Thank you, Julia and Julius Ariail, for taking and posting these photographs: