Our 1871 Foundation: Securing Property for the First Episcopal Church

For over 20 years, Troupville, the county seat for Lowndes County, was a thriving community. In 1858, it was published that a new railroad line was to traverse Lowndes County, and it would not go through Troupville but instead four miles away through the community of Valdosta. Residents of Troupville began proactively relocating their homes and businesses to Valdosta in anticipation of the new rail station. The first train came through Valdosta in July 1860 igniting new commercial opportunities. The post office moved from Troupville to Valdosta in November 1860. The General Assembly designated Valdosta as the new county seat and incorporated it on December 7, 1860 (Acts of the General Assembly of the State of Georgia, passed in Milledgeville, at an annual session in November and December 1860, 1861, p. 107).

Episcopalians were present in Valdosta from its beginning. Early services were held by traveling clergy from Georgia, Florida, Alabama, and Mississippi. The Rev. Samuel Benedict (1824-1891), rector of St. John’s, Savannah, from 1867-1877, and Archdeacon of South Georgia held services in private homes and in the courthouse on an irregular basis. The Diocese of Georgia, which met in Convention in 1871, reported that “Episcopalians [in Valdosta] had secured a lot and were at work on the church-building program,” with an additional $100.00 raised for missions (H. T. Malone, The Episcopal Church in Georgia 1733-1957, 1960).

123 North Ashley Street
With research assistance from Wiregrass Title Services, we ascertained a lot was purchased July 8, 1871. Specifically, H. P. Morris to the Right Reverend John W. Beckwith D. D. Bishop of the Protestant Episcopal Church in the Diocese of Georgia and his successors in office, for $100, a lot being in the Town of Valdosta, Lot 8 in Block 11, east side of Ashley Street containing 40 feet front and 90 feet deep (Lowndes County, GA Deed Book C, p. 615-16, Parcel 0118C 223). This property was located at 123 N. Ashley Street.

Although a church was not constructed on this lot, the purchase of the property signifies the Diocese of Georgia’s 1871 presence in Valdosta. The Diocese retained this property for 38 years, selling it December 29, 1909 to J. M. Smith for $4,500 (Lowndes County, GA Deed Book HH, p. 58). The property was used for other purposes. In reviewing the Sanborn Fire Insurance Maps online, the lot on N. Ashley Street held the following businesses: vacant lot (1885, 1889, 1895), snack house (1900), restaurant (1905), furniture store (1911, 1912), and music store (1922). A bronze plaque affixed to the exterior of the structure refers to it as the Register Bros. Building, circa 1910. In 2021, Cottonwood Market & Boutique occupied the property.

305 East Central Avenue
Raising funds for a building program proved difficult, plus the church had no permanent vicar, so Episcopalians continued to worship in private homes and at the courthouse for another 14 years. It was not until the Rev. H. B. Stuart Martin, who also had two other charges in South Georgia, became the first Vicar of the Valdosta Protestant Episcopal Church that a building program resumed. Using money saved by two families (Parr and Wilson), a lot three times larger than the Ashley Street property was purchased from Mary “Polly” (Futch) Griffin (1831-1892), widow of early Lowndes County settler Joshua Griffin (1822-1877), on September 10, 1885. Specifically, Mary Griffin to John W. Beckwith Bishop of the Diocese of Georgia and his successors in office in trust for the Protestant Episcopal Church in the Diocese of Georgia, for $225, a lot being in the Town of Valdosta, on Central Avenue, 140 feet east of its junction with Lee Street, Lot 12 (Lowndes County, GA Deed Book H, p. 480, Parcel 0118C 239). This property was 305 E. Central Avenue. In 2021, Pentecostal House of Prayer, Inc. owned the property. 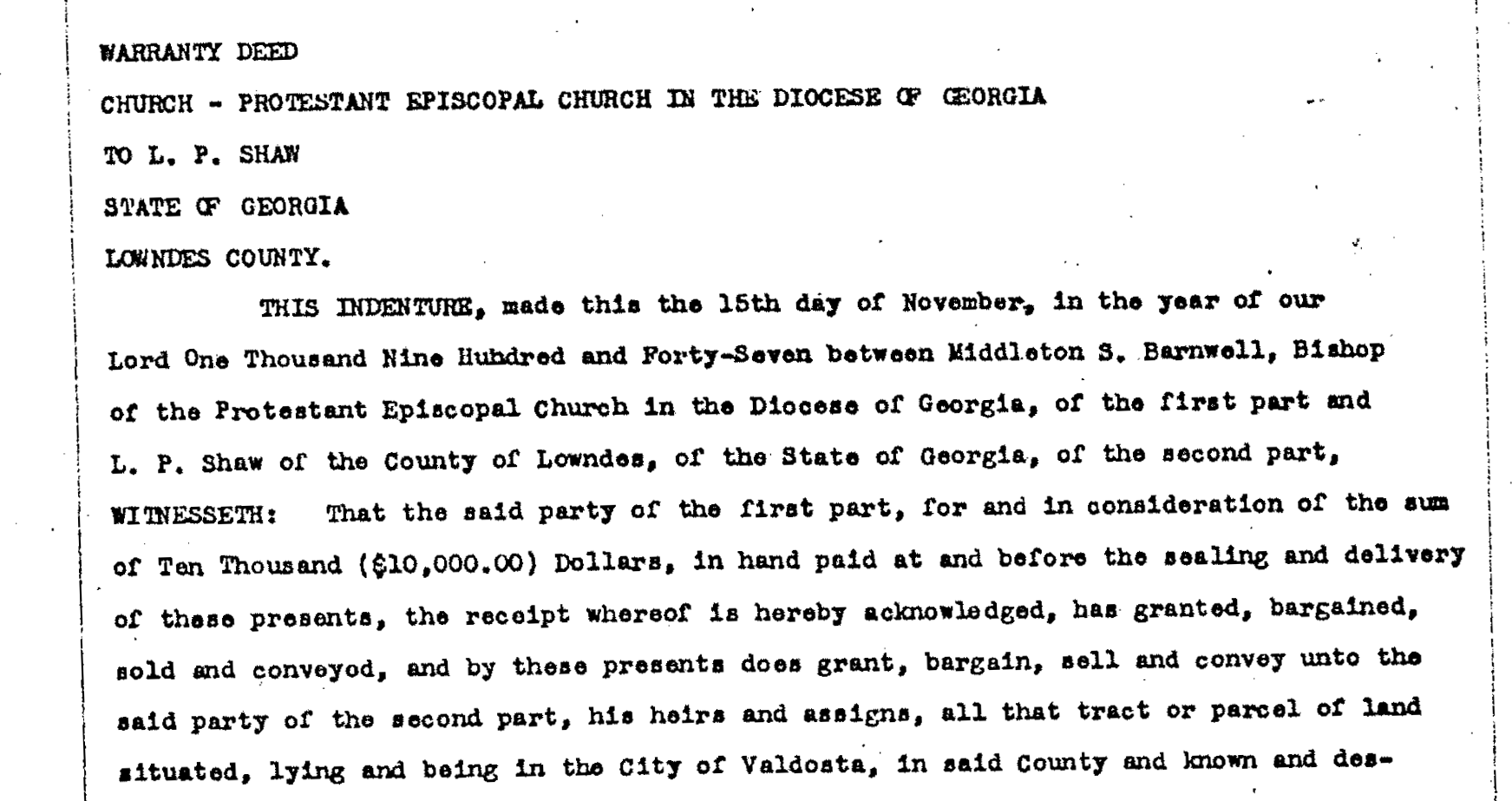 1521 North Patterson Street
Recognizing the need to expand, on January 1, 1946, the vestry of Christ Church purchased a lot measuring 132 feet by 205 feet on College Street from the Holmes estate for $6,000. This was 1521 N. Patterson Street, the property that Christ Episcopal Church occupies today. Frank R. Reade (1895-1957), President of Georgia State Womans College from 1934-1948, was a lifelong Episcopalian from Abington, Virginia. He allowed the Episcopal Church to use the college’s Ashley Hall Auditorium on Sunday mornings while the new church building was being constructed across the street (Letter from Frank R. Reade to Marion Smith, 09/14/1946). Ground was broken on May 3, 1948 with the dedication and first communion held on February 20, 1949.